Vinyl Music Records: A Musical Journey Down The Memory Lane

Are you a fan of the melodies from the 90s? Do you still groove on the voices of music stalwarts including Kumar Sanu, Sonu Nigam, Alka Yagnik, Abhijeet Bhattacharya, and Kavita KrishnaMurthy? If so, get ready to re-wind time through these handpicked records from the musical era. 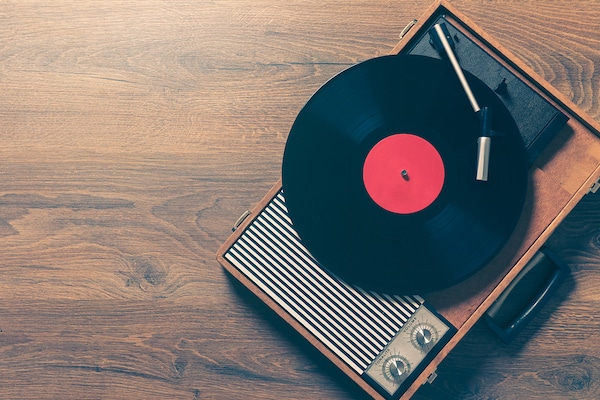 Music records are one of the classiest ways of revering music

Music records are one of the classiest ways of rewinding the time dial. Once a widely used instrument for enjoying music, they attract music buffs with a thing for antiquity. The trend of getting a record is steadily pacing up. From Instagram influencers to celebrities, people love to get clicked with them. Music records for the latest films are also available in the market. However, if you prefer it old school and love to groove on the melodies from the past, here is a list of records that once ruled over the Bollywood. Put on your musical hats; all you need is a good record player and a musical record disc with your favourite melodies, and voila!

Vinyl Records from the Bygone Days of Bollywood

Get ready to hop on to a musical romantic journey with this record from the romantic-comedy film, Dil Hai Ke Manta Nahi. Directed by the famous music-duo Nadeen-Shravan, the melodies of this film rightly capture the essence and innocence of unexpected love. Music stalwarts such as Kumar Sanu, Anuradha Paudwal, Abhijeet, Debashish Dasgupta, Aziz Khan, Shahani and Babla Mehta have sung the songs. The record contains famous songs from films Tu Pyar Hai Kisi Aur Ka, Adayein Bhi Hain, Mohabbat Bhi Hai, and Dil Hai Ke Manta Nahi. All the songs filmed on Puja Bhatt and Amir Khan were loved by the audience back then.

The heart touching story of an aspiring musician in love with his childhood beau has been beautifully narrated in the songs of this Shahrukh Khan starrer. Most of the songs focus on how he tries to woo the gorgeous Suchitra Krishnamoorthy and how this unrequited love shatters him.The music was directed by Jatin-Lalit and lyrics were penned by Majrooh Sultanpuri.  All the songs of this coming-of-age romantic comedy were loved by the audience and as many as 8,00,000 soundtrack albums were sold in India back then. Enjoy all the tracks of this film including Deewana Dil Deewana, Ae Kash Ke Hum and Aana Mere Pyar Ko Na Tum.

The music of this  super-hit is a cocktail of romance, sensuality, and grooviness. The songs rightly portray the intricacies of love and passion, which lie in line with the film's plot of a love triangle, portrayed by the Urmila Matondkar, Aamir Khan, and Jackie Shroff. The music for the entire film has been directed by Oscar recipient A.R. Rehman, who has sung two songs himself. Rest of the melodies have been sung by the singing stalwarts – Sujatha, S P Balasubrahmanyam, Hariharan S. Janaki, Kavita Krishnamurthy, and P. Unnikrishnan.  The song Hai Rama, sung by Hariharan and Swarnalatha, is known till date for its sensuality. Check the following record for all the songs from this romantic comedy including Mangta Hai Kya, Rangeela, and Tanha Tanha Yaha Pe Jeena.

The music of this film majorly revolves around love and admiration and partly touches upon the theme of patriotism and NRI weddings. A brainchild of the music directors Nadeem-Shravan, Vanraj Bhatia and, Nadeem Saifee, the music of Pardes is power-packed with emotions. Notable singers including Alka Yagnik, Udita Narayana, Kumar Sanu, Kavita Krishnamurthy, K.S Chitra, Sapna Awasthi, Hema Sardesai, Sonu Nigam, Hariharan, and Shankar Mahadevan. The music album was loved by one and all and was nominated in the music category of Filmfare. Enjoy all the hits from this musical romance such as Yeh Dil Deewana, Do Dil Mil Rahe Hain and I Love My India.

The fact that this film's songs are soul-stirring can be inferred from the National Award it won for best music direction, besides nine Filmfare nominations. The film in itself speaks volumes about music. It is based on the love triangle of a classical music maestro's daughter played by Aishwarya Rai, a music enthusiast from Italy who comes to the maestro for learning music, played by Salman Khan, and the guy whom the maestro finds as a suitable match for Rai, played by Ajay Devgan. The film covers songs on a variety of themes ranging from love, heartbreak, courtship, and traditional celebrations. Notable singers such as Kavita Krishnamurthy, Alka Yagnik, Kumar Sanu, Udit Narayan, Hariharan, Vinod Rathod, Sultan Khan, Shankar Mahadevan, and KK have sung in the film. Enjoy all the melodies from the film on this record, including Tadap Tadap, Nimbooda, Dholi Taro Dhol Baje, and Chand Chup Badal Mein.

Q. How to transfer vinyl onto a computer?

A. To copy music on to a computer, one just needs a record player with a USB port, and Audacity, which is a simple-to-use and free audio editing software. The computer will act as a recorder for the vinyl and, once the recording is completed, a simple set-up process will follow, which could vary for a Windows or Mac system.

Q. How to clean vinyl records?

A. There could be various ways to clean a vinyl with some of the best ones being-

1. Using a carbon fibre brush to clean the vinyl before and after every play.

2. Cleaning using a mixture of record cleaning fluid and water (distilled and not tap!). After cleaning the vinyl using liquids, make sure to dry clean it using a separate microfibre cloth.

3. For those with a huge collection of the records, there are vacuum cleaning machines that could help.

Q. How to store vinyl records?

A. Using plastic sleeves is one of the best ways to store a vinyl record. To reduce static, opting for wood vinyl record storage containers instead of metal ones, can be helpful. On a shelf, the vinyl records should be stored with immovable dividers with a gap of 4-6 inches that support the entire face of the disc in its sleeve.

Vinyl Music Records: A Musical Journey Down The Memory Lane