We have come up with inspiring stories of some great Indian cricketers. Buy an autobiography of your favourite cricketer from our list, and get reading. 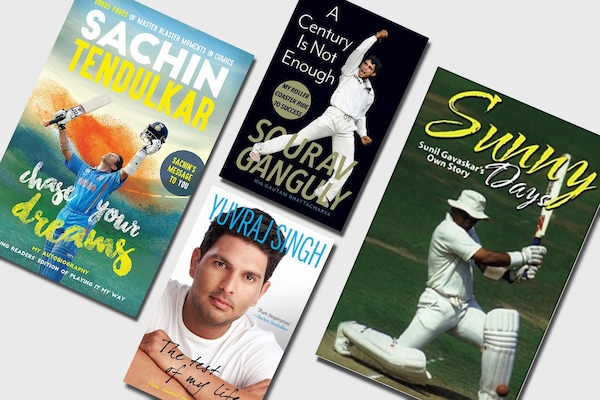 Read these gripping autobiographies of five Indian cricketers, who are known for their excellent performances not just in India but across the globe. Read VVS Laxman, Sunil Gavaskar, Yuvraj Singh, Sourav Ganguly, and Sachin Tendulkar tell their tales in their own words. Get inspired by reading the story of these greatest cricketers. These books tell how the five cricketers faced huge challenges in their lives, but with positive intent crossed all hurdles and became house-hold names, and some of the most popular faces of Indian cricket.

AUTOBIOGRAPHIES OF SOME OF THE GREATEST INDIAN CRICKETERS WITH PRICE

In his autobiography, 281 and Beyond, Laxman recounts his days of struggle and the game-changing knock of 281 against Australia at Eden Gardens in Kolkata. The book also tells about Laxman's experience with the former Indian coaches John Wright and Greg Chappell. Delve into the story of this rather soft-spoken cricketer, who despite being a phenomenal success, never made it to a World Cup team.

The book tells about the rise of one of the greatest cricketing legends in India- Sunil Gavaskar. The book recollects the childhood cricket-playing days of Gavaskar, and shares lesser known, shocking, and interesting facts about the legendary cricketer. A fascinating account of the life and works of Sunil Manohar Gavaskar, Sunny Days: Sunil Gavaskar's Own Story is rather fluently written, and is must-read for all cricket fans.

3. Yuvraj Singh The Test Of My Life (Hardcover)

The autobiography of the 2011 World Cup Man of the Series Yuvraj Singh tells all about the history of the much loved cricketer. The ups and downs of his career and the story of his strong comeback after cancer have been recounted by Singh in this book.

Yuvraj singh The Test Of My Life

4. A Century is not Enough: My Roller-coaster Ride to Success (Hardcover)

The book has been authored by former Indian skipper Sourav Ganguly himself, and reveals the journey of the sixth greatest One Day Batsman of all time. The book also includes the story of Ganguly's battle with the former Indian coach Greg Chappell. From his struggles to be selected in the Indian cricket team to his victories overseas, the book has gripping chapters on the career of Ganguly, arguably one of the greatest captains of the national cricket team.

A Century is not Enough: My Roller-coaster Ride to Success

The book is authored by the highest run-scorer of all time Master Blaster Sachin Tendulkar. In the book, Tendulkar recounts how a boy from a middle-class family achieved the dream of becoming a successful cricketer by means of hard-work without any short cuts- a mantra shared with him by his father.

For the latest deals, offers and news, follow HotDeals360 on Facebook, Twitter, Instagram, Google News and subscribe to our YouTube channel.
The HotDeals360 team writes about stuff we think you'll like. HotDeals360 has affiliate partnerships, so we get a share of the revenue from your purchase.
Topic
Cricketers Autobiography Sachin Tendulkar Sunil Gavaskar Sourav Ganguly Yuvraj Singh AB De Villiers
More From Books
Advertisement
Follow Us
Fear of Missing Out Best Deals?
Subscribe to our newsletter. Now!
Recommended
Trending
Latest
Quick Links
Trending
Latest