Comet Neowise to Make its Way Across India: Everything You Need to Know in 10 points

Newly discovered comet Neowise will be visible in Indian skies for 20 days starting July 14. Here are 10 things you need to know about this once-in-a-lifetime event. 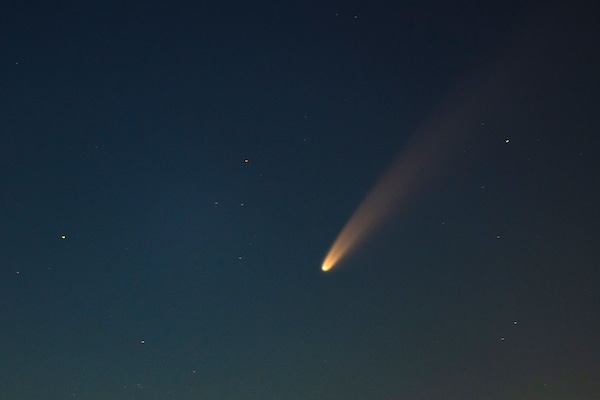 Comet Neowise will be visible from India for the next 20 days — and this unique phenomenon should not be missed. We've put together all the facts you need to know in a simple cheat sheet, so you can plan how to watch the comet for yourself. Here's everything about Neowise in ten points.

1. Neowise is a newly discovered comet that is going to be flying past Earth for the coming few weeks, making for a rare celestial show during the dark hours of the day.

2. Comet Neowise was in Mercury's orbit a week ago, and its close proximity to the sun caused dust and gas to burn off its surface, creating a long debris tail.

3. Now, the comet is close to Earth and will be visible from different parts of the world until mid-August- when it will be heading back towards the outer solar system. The comet has already been spotted in the Northern Hemisphere, where it will be visible for another month.

4. In India, the comet can be spotted for the next 20 days, and could be seen even with the naked eye. But, while it's visible with the naked eye in dark skies with little or no pollution, binoculars are needed to see the long tail.

5. The comet will appear low in the northwest sky (20 degrees from the horizon), and in the evenings to follow, the comet will rapidly climb higher in the sky and will be visible for longer periods.

6. Comet Neowise measures about three miles or five kilometres, and is being considered a fairly large comet, which will make for a rare sighting.

7. Officially, the comet has been named C2020 F3 NEOWISE, after the NASA mission that spotted it.The said mission was looking for near-Earth asteroids, the ones that could be potentially hazardous to the planet; and astronomers spotted the unique Neowise during their findings.

8. According to NASA, it takes the comet about 6,800 years to complete its path around the sun, making the event a truly a once-in-a-lifetime experience.

9. The comet's nucleus is covered with a sooty material dating back to the origin of our solar system from 4.6 billion years ago.

10. Newowise's closest approach to Earth comes on July 22, at a distance of about 64 million miles. The comet's appearance will be one of the brightest of the century.