Hubble has captured the edge of a blast that took place in space between 10,000 to 20,000 years ago. Understand all about it, here. 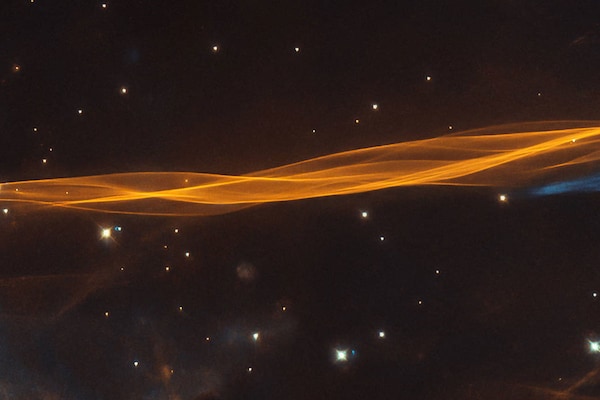 Captured by Hubble, the image is being said to appear like a delicate veil draped across the sky

NASA has released a rather extraordinary image of a shock wave of a supernova explosion that took place between 10,000 to 20,000 years ago. Captured by the Hubble telescope, the image is being said to appear “like a delicate veil draped across the sky.”

The image is a mere remnant of a supernova blast that took place in the Cygnus constellation, within the Milky Way, about ~2,400 light-years away from planet Earth.

The fringe, or the remnant captured, covers an area 36 times larger than the full Moon in the constellation of Cygnus (the Swan).

“The original supernova explosion blasted apart a dying star about 20 times more massive than our Sun between 10,000 and 20,000 years ago. Since then, the remnant has expanded 60 light-years from its center. The shockwave marks the outer edge of the supernova remnant and continues to expand at around 220 miles per second. The interaction of the ejected material and the low-density interstellar material swept up by the shockwave forms the distinctive veil-like structure seen in this image,” NASA stated.

Appearing like a delicate veil draped across the sky, this @NASAHubble image reminds us of the power of imagination. What does it look like to you?⁣
⁣
In reality, it's part of a supernova blast wave in the constellation Cygnus, ~2,400 light-years away: https://t.co/R81y1rR1tS pic.twitter.com/2eyktwoZEo

What Is A Supernova and What Causes It

A supernova is the extremely bright, super-powerful explosion of a star. It is the biggest explosion that humans have ever seen.

As per NASA, one type of supernova is caused by the “last hurrah” of a dying massive star. This happens when a star at least five times the mass of our sun explodes.

A second type of supernova can happen in systems where two stars orbit one another and at least one of those stars is an Earth-sized white dwarf. A white dwarf is what's left after a star the size of our sun has run out of fuel. If one white dwarf collides with another or pulls too much matter from its nearby star, the white dwarf can explode.

The supernovas are rare celestial events, and can be so bright that they outshine their entire galaxies for a few days or even months. They can be seen across the universe.

What Is The Hubble Telescope

Launched by NASA in 1990, the Hubble is a large telescope in space. It is as big as a school bus, and weighs as much as two adult elephants. Hubble travels around Earth at about 5 miles per second, and has taken some of the clearest pictures of planets, stars and galaxies.

The telescope is unlike any other on Earth, with a resolution so sharp that it can capture details close to the nucleus of a celestial being. It orbits high above Earth and its atmosphere, and uses radio waves to send the pictures through the air back to Earth.