Online Dating: The Modern Romance In Times of Corona

As the world has been thrown to folds in hands of a notorious virus, romance has managed to make its way through the digital realms. From video calls, virtual shows and increased lengths of texts to the online gaming spree, dating in a pandemic is experimenting with various avatars. 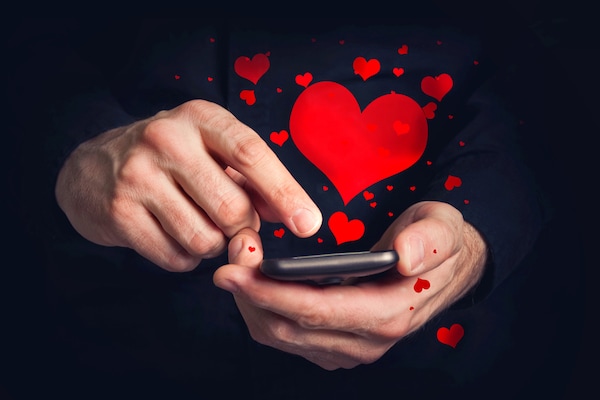 As the virus grapples the foundation of human society, many are finding solace in online romance

Online dating in the times of coronavirus has seen a spike, and that is kind of needless to say. Although romance and drama have always been hand-in-glove kind of buddies, but both the romance and the drama have taken digital turns in 2020. While the villains in folklore came with a face, name and societal status, the contemporary evil comes in the form of a notorious virus. Centuries apart, the two bring to the lovers a similar buffet of helplessness, suspense, and a whole lot of drama! Nevertheless, like always, dating and romance are braving the challenge with the strength of a sapling confidently blooming through the cracks of a strained wall.

As humanity adjusts to the uncanny combination of an alcoholic solution and a fabric (read sanitiser and face mask) becoming survival essentials, the evolution of dating has paced up like never before. Though the idea of digital romance has had floated around for quite some time now, it has seen a dramatic rise since the dream dates started coming attached with the fear of catching a deadly infection. From couples cooped up afar to those in search of that special someone, digital world has emerged as the last straw.

Representing yourself in a small rectangular technology box a.k.a smartphones comes with its fair share of challenges. With cafes, theatres, events, picnics and practically any conventional idea of the date having turned to history, temporarily, the focus has shifted significantly to the conversations in hand. From couples trying to maintain the spark of their relationship to singles trying to shift their identity from an internet stranger to a warm person, dating has taken a creative turn.

An interesting trend picked up on the dating applications is that of pandemic-inspired pick-up lines. From smooth as butter ones to the creepy ones trying to fit in the trend, these pickup lines have managed to catch the attention of the netizens and have been in trends ever since. From “If Covid-19 isn't taking you out, may I?” to the filmy ones such as the Notting Hill inspired "I'm just a girl, standing 6 feet away from a boy. Asking him to maybe move back another foot,” dating enthusiasts are leaving no stone unturned.

The pickup lines are just a beginning, though! From virtual dinner dates to making trendy dance videos, people all over are experimenting with several ideas.

“Even though we can't meet right now, every week I have a virtual dinner date with my boyfriend. We both get dressed up, cook or order our favourite meals, put up the background of our favourite eatery in the zoom call and cherish this new dating ritual,” shares Shalini Bhattacharya, a freelance writer based in Mumbai.

Even OTT platforms such as Netflix have introduced features that allow people to watch a show together, like Facebook's Watch Party, re-creating the idea of movie dates. With an increasing number of new releases choosing the platform for their debut release, it wouldn't be wrong to think of these streaming platforms as digital avatars of conventional cinemas. Some couples are also going for virtual art exhibitions, museum tours, music events, workshops and concerts.

“Even though online events cannot replace the charm of the real ones, we cannot argue the fact that it still isn't very safe to step outside. It's good to have at least something to look forward to, even if it is via a digital platform,” shares Deepak Gupta, an I.T expert based in Delhi.

Other couples are spicing up the curse of pandemic via online gaming. From the digitized avatars of old school board games such as ludo, to advance video games, the craze is taking over, as evident from the dramatic rise in turnovers of these applications during the pandemic. “It's actually a lot of fun! We are re-kindling our romance through the bylanes of nostalgia. In fact, I am discovering a whole new side of my partner through these games. I never knew that my seemingly harmless beloved is so competitive when it comes to UNO or Ludo!” adds Gupta.

An antidote to boredom?

Coronavirus, undoubtedly, has had humanity in shatters. With Homo sapiens, the social animals, locked within their homes, boredom comes served hot along with breakfast with special toppings of anxiety. The severe impact on mental health, adds to the seasoning. In such a scenario, the natural human instinct of socialising comes to the forefront and with digital screens being the only key to connecting with others, technology serves as the ultimate escape.

Some believe that this crippling boredom might be one of the biggest factors in pushing people to online dating. As confirmed by all the major dating applications, the user base, as well as the average duration of people using the app, has risen. As per Tinder, conversations rose by 39% and the average length of conversations, by 29% in India. Another dating application, Bumble confirms the spike of almost 25% in the messages being sent in the initial phase of the pandemic itself, between March 13 and March 22, 2020.

Many dating apps have also released videos, short series and social media campaigns in collaboration with influencers on online dating, attracting the youth to this modern romance. Thanks to the power of social media, this romanticized projection of digital romance has also incited excitement in the hearts of those bored to death and ready to take upon whatever brings in a change in routine, from baking to online dating!

Chirag Kothi, a freelance graphic designer from Kochi shares, "I have never been more bored in my entire life. I have tried everything from cooking and baking to even taking up a new language. I am not really into online dating, but desperate times call for desperate measures! Plus, it's interesting to listen to other's lockdown stories."

Any new behaviour takes approximately 66 days to become automatic, and it has been almost a year since the virus has thrown life out of order globally. To be precise, it has been seven months since India first went into lockdown. With a substantial amount of time spent in the fear of human contact, and no signs of it going away anytime sooner, the new dating habits are more than likely to last long.

Many believe that it'll take a good amount of time before people again become comfortable with the idea of meeting strangers for a date. Additionally, the comfort of choosing from a wide number of options in the dating apps might also affect the future approach of dating enthusiasts.

“Even after social distancing rules are lifted, they would continue to use distance dating as a step in the courtship process, a way to screen people before they actually meet in person,” Times magazine reported a few months ago.

Whether or not the pattern changes after the virus becomes history is yet to be known. However, taking in lieu the uninterrupted dating rituals even in the middle of a pandemic assures that romance has a long way to go. Although the idea of dating and romance may keep changing, the spirit is here to stay.