Folktales not only bring to the table a slice of one's culture, but also important morals and life lessons wrapped nicely in an interesting narrative style. Find some of these popular Indian classical tales that have been fascinating the young minds for many generations now. 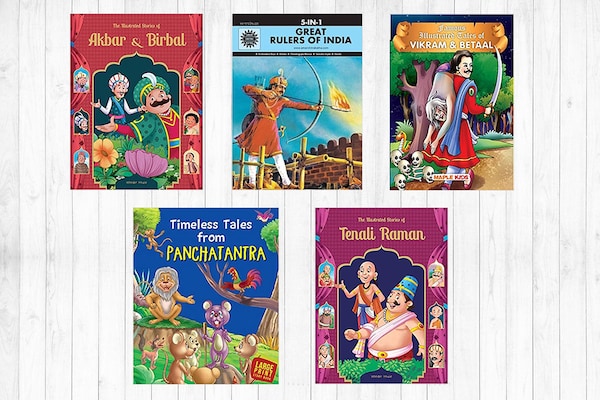 Indian classical stories are a perfect mix of human emotions, simplicity of life, and morals. With an interesting and gripping narrative, these surely fascinate the curious young minds.  A time tested inoculant for imagination, creativity and emotional development in kids, these tales also bring to the forefront the richness of Indian culture. Find some of the most popular Indian folktales for children in the listicle below.

1. The Illustrated Stories Of Tenali Raman

Tenali Raman was one of the most brilliant Telugu poets, thinkers, scholars and court men in ancient India who was also a special advisor to king Krishnadevaraya. He was known for his extraordinary wit, intelligence, loyalty towards the king, and penchant for solving pressing challenges. His tales are a mix of humour, intelligence and wit, with each story giving away an important life lesson or moral in the end. The storybook includes 20 such fascinating fables of Raman, that'll make for a perfect bedtime story!

The Illustrated Stories of Tenali Raman: Classic Tales From India

One of the most popular mythological stories of all times, the tales of Vikram and Betaal are based on Betal Pachisi, a collection of traditional stories and legends from the yesteryears. As per the storyline, the valiant king Vikramaditya is on his way to take with him the spirit of betaal from a haunted graveyard. On their way back, betaal narrates several stories and puts forth a tricky question at the end of each, which is responded to with wit, heart, and intelligence by the king. The stories are a blend of life lessons, morals, emotional dilemmas and wit. The book is filled with colourful illustrations and pictures, giving wings to kids' imagination!

3. The Illustrated Stories Of Akbar and Birbal

Birbal is one of the most celebrated gems of the Mughal Empire whose timeless stories enjoy unwavering attention and fandom till date. Main advisor to the emperor Akbar and one of the nine jewels in his court Birbal was a man of extraordinary wit and intelligence. His stories are a blend of his effortless problem-solving skills complemented by his intelligent decision-making abilities. Wrapped in humour and entertainment, the stories present various conducts of life and morals, along with virtues of friendship and loyalty. The timeless tactics suggested by this gem are relevant to date!

The Illustrated Stories of Akbar and Birbal: Classic Tales From India

This storybook is a collection of traditional stories of Panchatantra that bring to the young minds various virtues and conducts of life in the form of easy to understand stories. These fables seed in young minds the mantras of a happy, content, and satisfying life intertwined with morals and life lessons that come in handy throughout life. With animals as their protagonist, these stories come with a universal appeal. This book, in particular, brings six such stories that'll stay with your little one always!

Indian history is filled with valiant kings who are known just for their bravery and intelligence, but benevolence and strive for justice as well. These kings are not just recognised as rulers, rather leaders who had in their heart nothing, but the love for their people. This fascinating comic book talks about five such kings who find a special place in history as well as the hearts of people, including Krishnadeva Raya, Ashoka, Chandragupta Maurya, Samudra Gupta, and Harsha. These stories not only seed the idea of good leadership in the minds of its readers but also the significance of morals and values.

Why Should You Read Story Books To Kids?